On a recent Wednesday morning, the line outside San Francisco’s Mission High School snaked down Dolores Street, wrapping into the school parking lot. Chalk X’s on the pavement, 6 feet apart, instructed people where to stand to maintain proper social distance. The hundred assembled were there to pick up bags of free meals for their children, provided by the San Francisco Unified School District.

In response to COVID-19, the district closed schools on March 13 and has since announced it will not reopen for the remainder of the academic year. For all the turmoil this has created for families, perhaps the gravest threat is food insecurity. The demand is there: The district has increased the number of meals it distributed to families from 21,000 the first week of the shutdown to 120,000 last week. In communities throughout the Bay Area and beyond, school nutrition programs have stepped in to fill a significant need, quickly shifting their distribution models and adjusting their meal offerings to meet demand and provide an ongoing source of wholesome meals to children.

In the weeks prior to the school shutdown, Jennifer LeBarre, executive director of Student Nutrition Services for the district, and her team were working furiously to develop a plan to feed the children who depend on the district for one, two or three meals a day. The number of meals it served last week from 18 distribution sites, 120,000, has almost reached the 150,000 it serves total during a normal week of school.

At the start, parents picking up food had to be accompanied by a school-age child. But that red tape was quickly abandoned, and now meals can be picked up by anyone, regardless of whether a child is present.

“The need is there. Food insecurity is already a major issue, and a month into this, many more families are experiencing it for the first time. So we are not only feeding SFUSD students, we’re feeding all children,” says LeBarre. “If your kids go to private school, if you are a parent of a 2-year-old who hasn’t started school yet, even if you don’t have children, you will be fed.”

Meals are distributed by SFUSD school nutrition employees and volunteers. Children with severe food allergies and those identified by the special education department as having demonstrated need have meals delivered to their homes by a network of volunteers, parents and teachers.

On Mondays at school pickup locations around the city, the bags of food for each child are filled with enough breakfasts, lunches and dinners for two days; on Wednesdays, they’re loaded with enough for three days. The meals are prepared by Revolution Foods, the Oakland company that during the regular school year supplies S.F. Unified and other schools and organizations with breakfasts and lunches. During the coronavirus crisis, the company has also partnered with Oakland Unified, West Contra Costa Unified and Modesto City Schools. The company, founded in 2006, makes and distributes kid-inspired meals that reflect different cultures, meet or exceed national nutrition standards and are fully reimbursable by the USDA and the California Department of Education.

The meals feature familiar favorites from the regular lunch menu, which are meant to be eaten for either lunch or dinner. There are small pizzas, refried bean-and-cheese burritos, cheeseburgers, pupusas and Korean beef bowls. The food is packed on cardboard trays, overwrapped in a plastic film and designed to be heated in the oven in its packaging (microwaving is also an option). There are vegetable options such as raw broccoli florets, baby carrots, and bowls of black beans and corn. Cheese sticks, shelf-stable granola bars, crackers and juice boxes round out the offerings. For breakfast, there are single-serve cups of cereal, muffins and apple sauce; milk is provided by Crystal Dairy. 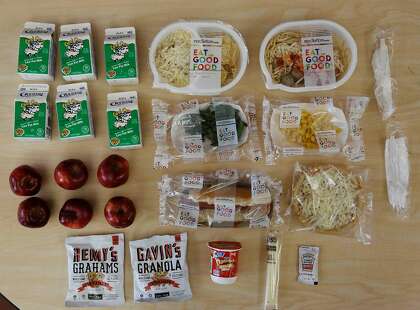 Though the fundamental service provided by Revolution Foods hasn’t changed in response to the pandemic, Revolution Foods CEO Kristin Groos Richmond says her team is “working around the clock” to produce meals, troubleshoot distribution challenges and forge partnerships with organizations beyond school districts, including the YMCA and World Central Kitchn, to provide emergency meals.

Groos Richmond reports that the company hasn’t seen any significant shifts to the food supply chain, with one important exception: shelf-stable proteins. The bulk of the national supply of items such as canned tuna, shelf-stable hummus and jerky sticks was purchased early on by the Federal Emergency Management Agency for its own relief efforts, leaving Revolution scrambling to secure enough to make shelf-stable meals for the most vulnerable families that are experiencing both food insecurity and homelessness, and are unable to store or heat food.

At Revolution Foods’ Oakland kitchen, safety measures have been ramped up in response to the novel coronavirus. Employees have their temperatures taken before they enter the facility, receive sick pay if they need to take leave and are social distancing as much as possible, says Groos Richmond.

At the distribution sites, individuals are served one at a time, and bags containing food are loaded onto a tray that’s then slid across a table for pickup, to ensure contactless delivery.

“It has actually been fun,” says Mancera, who usually works in nutrition services at Galileo High. “I like to see the families, and it’s kind of a rush to get everything packed and ready to distribute in time.”

Lamar Williams, who normally works as a security guard and track coach at Mission High, has been volunteering at the distribution site. “It’s depressing to stay at home,” says Williams. “I like to come out here, see some familiar faces, and help out for a few hours.” Williams tells the people in line to “have a blessed day” as they load up their bags and walk away.

I ask Smith what they do with leftover food at the distribution sites. “We don’t have extra food. We have not once had extra food,” she says. 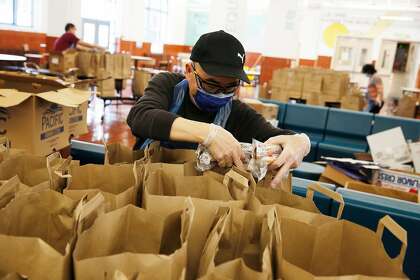 For Paul Harbison, a single father whose children, ages 7 and 12, attend Rooftop Elementary, the meals give him a much-needed break. Going to the grocery store “is one of the most stressful things I have to do now. I don’t want to bring my kids, but I also don’t want to leave them at home alone for too long,” he says, standing at the end of the Mission High meal distribution line. Eighteen minutes later he’s received his bags and is headed home.

In addition to the prepared meals, Harbison, an architectural designer who has seen his work dry up in recent weeks, has taken advantage of the Pop-Up Food Pantries organized by the San Francisco-Marin Food Bank at school sites on Tuesdays, where he picked up rice, fruit and vegetables. “I’ll be doing this for the foreseeable future,” he says. “But I can’t wait to go to Trader Joe’s when this is all over.”

The question of when all this will be over weighs heavily on the minds of Groos Richmond and LeBarre, who anticipate that the need for meals will continue in earnest through summer.

“I worry that if the economy opens in a staggered way, fortunate workers will return to higher-paid jobs. But there will be an extended tail of people for whom there is no work to return to, a tail of need we have to address,” says Groos Richmond. The district, led by LeBarre, and Revolution Foods are working on a plan for summer meals.

In normal times, schools offer free, reduced and paid meals based on need and are reimbursed a different amount for each. All of the meals being distributed during school closures are reimbursed by the USDA and the California Department of Education at the free rate. 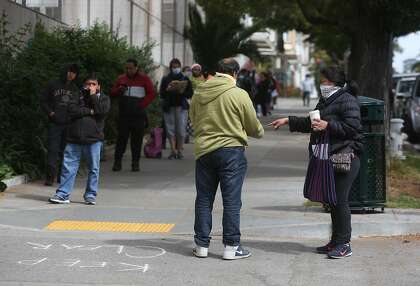 The USDA typically provides funding for the district to provide breakfast and lunch during the summer to families in need, but dinner is not included. As of right now, the USDA has not ensured the necessary funding that would allow the district to continue serving the third meal after the official end of the school year on June 30.

In addition, there are questions about how the district will be able to provide meals over the summer; waivers are currently allowing the district to send food home (rather than serve the meals at schools) but it’s unclear whether the waiver will be extended beyond June 30, a decision that is contingent on whether shelter in place is lifted or extended.

It’s these questions that keep LeBarre, a 20-year veteran of Student Nutrition Services, up at night. But she’s committed to providing meals to those who need it all summer long, even if that means securing private funding to cover the cost.

“For those who need food, I want you to know that we are here for you,” LeBarre says.

When we emerge from this crisis, LeBarre hopes it is with increased empathy for those living paycheck to paycheck, as well as respect for essential employees, including school lunch providers. “People consider these jobs to be unskilled labor. But it takes skill to work as a school lunch employee,” LeBarre says. “And it’s these people — my people — who are keeping it all together and feeding kids and families right now. And it’s time to give them their due.”

For a complete list of locations providing meals, visit https://www.healthyeating.org/Schools/School-Wellness/School-Meal-Locations

SFUSD is operating 18 pickup locations throughout this city. The sites are open on Mondays and Wednesdays, 11 a.m. to noon; no ID necessary. Sfusd.edu/schoolfood

In addition, the San Francisco-Marin Food Bank is operating Pop-Up Pantries that are free and open to the public. For a complete list of locations and times, visit sfmfoodbank.org/find-food

To support SFUSD’s efforts, you can make a donation to cover the cost of mileage for delivered meals and other costs that are not reimbursed by the government. To donate, visit sfusd.edu/services/health-wellness/nutrition-school-meals/donate

Jessica Battilana is a San Francisco freelance writer and the author of “Repertoire: All the Recipes You Need.” Email: [email protected] Twitter: @jbattilana

Kids mental health will be OK