The secret to fighting COVID-19 could be in recovered patients. Here’s how antibodies could lead to a treatment for those fighting coronavirus.

As California reports its earliest coronavirus outbreak started in a nail salon, multiple states are making moves to open up similar personal care businesses, a part of the nation’s constantly shifting patchwork of social distancing regulations.

Those restrictions have led to skyrocketing unemployment as United States job losses reached 20.5 million in April. But many Americans believe the health benefits are worth economic pain, a new survey suggests.

Worldwide, there are more than 3.9 million cases of the coronavirus and more than 276,000 deaths. In the U.S., more than 77,000 people have died and 1.29 million cases have been confirmed as of Saturday,  according to the John Hopkins University data dashboard.

Our live blog is being updated throughout the day. Refresh for the latest news, and get updates in your inbox with The Daily Briefing. Scroll down for more details.

Here are some of the most significant developments to know today:

Some good news: This year’s Gerber baby has been chosen — Meet Magnolia Earl.

The federal government is shipping hundreds of donated cases of remdesivir, an experimental drug shown to be useful in treating COVID-19 patients, to six hard-hit states. The Food and Drug Administration cleared remdesivir for emergency use last week as a potential treatment for the coronavirus.

The 360 cases were being sent to Connecticut, Illinois, Iowa, Maryland, Michigan and New Jersey, the U.S. Department of Health and Human Services said Saturday. Each case contains 40 vials of the drug.

The antiviral drugs were donated by Gilead Sciences, which makes remdesivir. HHS said the doses will go to the more critical patients, including those on ventilators or in need of supplemental oxygen.

The department said a randomized controlled clinical trial suggests that remdesivir was associated with “faster recovery” for COVID-19 patients, although it cautioned that the data was not sufficient to determine if it was associated with lower mortality.

Three children have died in New York from inflammatory disease that might be linked to coronavirus, Gov. Andrew Cuomo said Saturday. The announcement adds to the state’s worry that it might be entering a new phase of the COVID-19 pandemic where it strikes children, who before had been deemed at low risk for the virus.

Cuomo said New York is up to at least 73 cases of the illness, which appears similar to Kawasaki disease or toxic shock syndrome, including a persistent fever.

The illness has been called “Pediatric Multi-System Inflammatory Syndrome Associated with COVID-19,” and Cuomo said the state will launch an investigation into it in conjunction with the U.S. Centers for Disease Control and Prevention.

Despite vehement objections from the Centers for Disease Control and Prevention, the White House is pushing to return to its failed experiment of relying on temperature screenings for air travelers to detect coronavirus, internal documents obtained by USA TODAY show.

The White House directive to check travelers in 20 U.S. airports for fever comes after earlier efforts by the CDC to screen travelers returning from China failed to stop the global pandemic from reaching the United States. Recent emails show CDC scientists, who have begun owning up to initial missteps in the federal response, trying to persuade the administration to reconsider.

“Thermal scanning as proposed is a poorly designed control and detection strategy as we have learned very clearly,”  Dr. Martin  Cetron, the CDC’s director of global mitigation and quarantine, wrote in an email to Department of Homeland Security officials on Thursday. “We should be concentrating our CDC resources where there is impact and a probability of mission success.” Read more here.

A federal judge ruled Friday that a Kentucky Baptist church – and all churches in the commonwealth – may hold in-person services Sunday despite the coronavirus pandemic.

The effect of the order is limited: Beshear has said he will lift the ban on church gatherings May 20, although attendance will be limited to follow social gathering guidelines.

Denver will lift its stay-home restrictions this weekend. Ocean City, Maryland, plans to reopen its Boardwalk, Inlet parking lot and beaches to the general public. And in Nevada, restaurants, retail stores, barbershops, hair salons and some brewpubs can resume limited operations Saturday.

Those are among many moves states have made in recent days to roll back social distancing restrictions.

In contrast, some states have said little about when restrictions will be lifted. In New Jersey, Gov. Phil Murphy has not publicly identified any key, specific benchmarks the state needs to hit to relax restrictions.

Find the latest news from your state.

President Vladimir Putin left a bouquet of red roses at the foot of the Eternal Flame, then briefly addressed the national on television, saying, “We know and firmly believe that we are invincible when we stand together,” without specifically mentioned the virus outbreak. 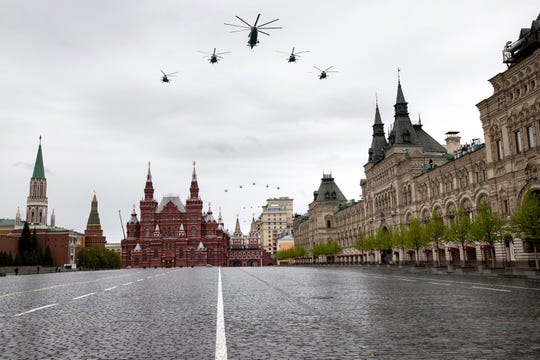 Russian military helicopters fly over over almost empty Red Square to mark the 75th anniversary of the Nazi defeat in World War II in Moscow, Russia, Saturday, May 9, 2020. A massive Victory Day parade on Red Square was canceled due to the coronavirus outbreak, but Russia marked the holiday with the flyby. (Photo: Alexander Zemlianichenko, AP)

With the latest cases pushing Russia ahead of Germany and France, Moscow Mayor Sergei Sobyanin extended the city’s lockdown until May 31 and ordered residents to wear face masks and gloves in all public places and transport, Moscow Times reports.

In Spain, restrictions on half the residents were eased Saturday, except for the hard-hit Madrid region, the epicenter of Spain’s outbreak. In the first phase, some small shops will be able to open, while bars and restaurants can only open “terraces” and must operate at 30% normal capacity.

In Germany, where the number of new cases fell for the first time in four days, restaurants, hotels and all shops were preparing to reopen, although individual German states can adjust the rules. Soccer matches are scheduled to resume May 15.

Delta cuts service to 10 US airports

Delta Air Lines is cutting service to 10 airports in the U.S. that serve cities including New York, Los Angeles and Chicago. It’s part of the company’s previously announced 85% reduction in service schedule. Delta says the airports where it is temporarily pulling service are relatively close o other, larger airports that travelers can use as an alternative. In New York, for example, Delta’s Westchester County Airport service will cease, but flyers can still get to LaGuardia. Flights will stop at Stewart International, but John F. Kennedy International is the close-by option. See the schedule changes here.

Roy Horn of ‘Siegfried and Roy’ dies of COVID-19

Roy Horn, half of the Las Vegas stage duo Siegfried & Roy, died of complications due to the coronavirus Friday. He was 75.

“Today, the world has lost one of the greats of magic, but I have lost my best friend,” Siegfried Fischbacher said in a statement. “From the moment we met, I knew Roy and I, together, would change the world. There could be no Siegfried without Roy, and no Roy without Siegfried.

“Roy was a fighter his whole life including during these final days. I give my heartfelt appreciation to the team of doctors, nurses and staff at Mountain View Hospital who worked heroically against this insidious virus that ultimately took Roy’s life.”

On the day he issued guidelines for parts of California to start reopening, Gov. Gavin Newsom also identified a nail salon as the origin of the coronavirus outbreak in the state, one of the first ones in the nation to get impacted.

Newsom provided details of the requirements for counties to relax social distancing measures beginning Friday, when clothing stores, florists, sporting goods stores and bookstores will be among the retailers allowed to operate again, albeit through curbside pick-up service.

Asked why businesses that offer personal-care services like nail salons can’t open yet, Newsom said, “This whole thing started in the state of California, the first community spread, in a nail salon. I just wanted to remind you, remind everybody, of that. I’m very worried about that.’’

He did not elaborate about the time and place community spread began in the state.

US cuts funding to group studying bat coronaviruses in China

The head of a research group that studies bat-borne coronaviruses in China similar to the COVID-19 strain that’s ravaged the globe has warned that a U.S. government decision to cut funding to his organization imperils American public health.

“I’m really concerned about where this leaves us,” said Peter Daszak, director of the New York-based organization, in a USA TODAY interview.

The National Institutes of Health confirmed EcoHealth Alliance’s $3.4 million grant, distributed over six years, was canceled on April 24. But it would not discuss details about how the decision was made.

The City of Cincinnati will close parts of 25 streets so restaurants can expand outdoor seating, a move that will help restaurants without patio space keep tables farther apart for social distancing  – and open as early as possible.

Restaurants and bars have been closed by state order since March 21 in order to curb the spread of the novel coronavirus. It’s put people out of work and shuttered restaurants who opted not to morph into carryouts.

Tampa announced a similar plan May 5. And cities in San Mateo County in California temporarily restricted traffic beginning late last month in areas so people could safely get together.

In a similar move, Seattle said 20 miles of streets closed amid the state’s stay-at-home order will be permanently closed to vehicles. The areas will remain for residents to exercise outside, and the construction of bike infrastructure will be accelerated in 2020, Mayor Jenny A. Durkan announced.

At least 11 U.S. Secret Service employees were reported to be infected with the coronavirus and about 60 other staffers were in self-quarantine, a person familiar with the matter said Friday.

The person who is not authorized to comment publicly declined to breakdown the numbers of civilian versus agent infections. The assignment locations of the sick employees also were not identified.

The service, which provides personal protection for the president, vice president and their families, along with visiting heads of state, has 7,600 employees, including more than 3,000 agents who work in close proximity to those they protect.

An aide to Vice President Mike Pence, press secretary Katie Miller, has tested positive for coronavirus, the White House confirmed. Pence was traveling to Iowa to meet faith leaders to discuss reopening religious services to the public, but his plane was delayed and some staffers disembarked.

This dry fruit is a healthy munching snack

500 food boxes were handed out on Kauai, more to go out to those in need

500 food boxes were handed out on Kauai, more to go out to those in need

The Best Biceps and Triceps Workout That Takes Just 10 Minutes

5 Highly Effective CrossFit Abs Workouts you can do at Home