Fitness training for rope rescues and other low-frequency/high-risk technical rescues doesn’t need to be as complex as it might seem. If you can train your body to be capable to move well, bear weight, and sustain strength and endurance, and if you use simple tasks and equipment effectively, then the long, drawn-out rescue can be done more efficiently with less negative effect on your body and on your team.

Fitness training for low-frequency/high-risk, long-duration runs, such as rope rescues, isn’t that much different than the training that we normally should apply as tactical athletes. (The injury-prone areas are the same: shoulders, knees and lower back/hips.) However, fitness training for these types of calls often is avoided, because it is difficult to build a workout program around the calls’ very complex and dynamic nature. That said, there are consistencies between normal operations and technical rescues upon which you can base the structure of your fitness training. Whether you are off the edge of a cliff or a building, pulling a basket on a 3-to-1, moving around in a trench or attempting a water rescue, chances are, balance and conditioning will come into play.

A key factor in your body staying balanced while under load or in motion is core strength. This doesn’t mean simply not falling over; it means being able to complete a task extremely effectively without getting injured.

Most lifting and lower back injuries that occur from lifting patients/cots can be traced back to improper lifting technique and a weak core, and, per our data, our average patients aren’t getting lighter but heavier over time. Core strength is just that: the strength of the core of your body. Imagine taking a tire and putting it at your midsection: That represents your core. Your core isn’t just your abdomen but a circle all the way around: pelvic floor muscles, internal and external obliques and the supporting muscles that are around the spine. A major part of core endurance is about supporting your spine while in movement or under load. Core training programs should involve all parts of the core, with specific movements that are based around longer endurance, not just strength of the core.

A good example of a body weight program for intermediate to advanced tactical athletes would be:

(You might wonder why sit ups aren’t included. Sit ups are more about hips flexion, spine rounding and, at times, if you’re pulling on your head, strain on your cervical spine.) 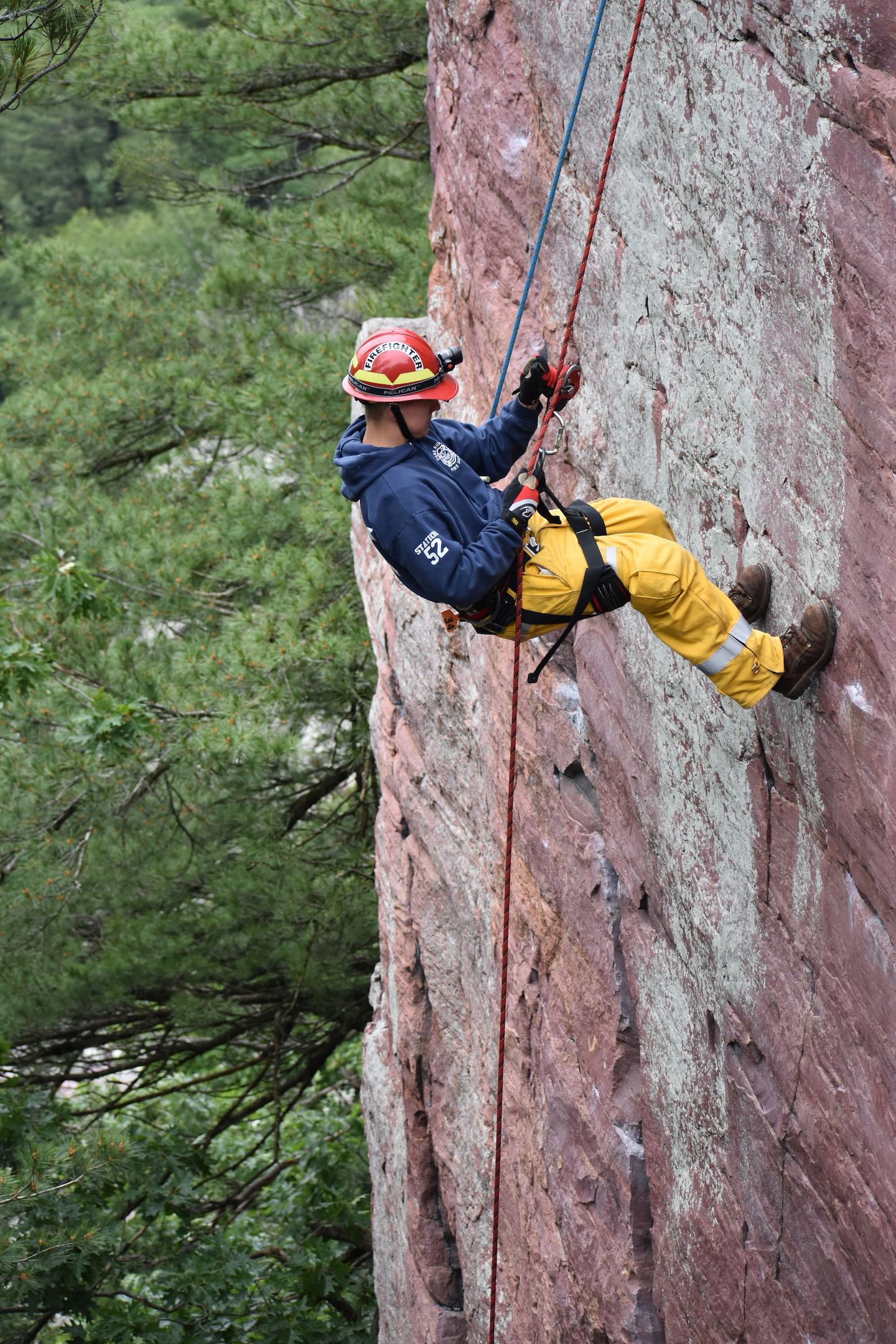 Being over the edge of a cliff or a building—or in a confined space or in rough water—likely will increase heart rate and raise stress level. Breathing capacity is critical to mitigating these things as much as possible. Squats, walking dumbbell lunges and lat pull-downs are among the exercises that help to improve breathing capacity.Photos by Mark Willer

Endurance is the power of withstanding hardship or stress. How can that relate to a technical rescue? Other than for specialty teams, a technical rescue, including a rope rescue, isn’t a high-frequency event, so it naturally will raise some mental “stressors.”

“It takes critical-thinking skills to perform a technical rescue,” says Mark Willer, who is an assistant chief for the Baraboo, WI, Fire Department and a rope rescue technician. In that vein, Willer says that it’s important to remove “disruptors” to one’s cognitive OODA (observe, orient, decide, act) loop, which is particularly important during exhausting calls.

When we run through movements that we typically don’t carry out nor that are included in training, the stamina, or endurance, of our body naturally will diminish, which is where the physical stressor can come into play.

Studies prove that when heart rate exceeds 150 bpm, critical-thinking and problem-solving drop substantially. If we aren’t thinking at our best, can we truly say that we are performing at our best?

“Almost all of us have experienced that one leader who can’t stay calm under pressure,” says Willer, who coordinates technical rescue activities for his department, the service of which includes Devil’s Lake State Park. “They usually pace around the scene looking at everything, micromanaging, forgetting important command tasks and, generally, causing chaos.”

Well, firefighters can fall back on muscle memory and training then, right? Not necessarily. Yes, many say that somewhere after 3,000–7,000 repetitions of a movement, an unconscious ability tends to kick in that permits us to just “do” something with high proficiency. However, this isn’t common with technical rescues, because, for most of us, we just don’t carry them out in large volumes. “As you continue to learn more about technical rescue, the more you become aware of what you don’t know,” Willer states.

So, building a training program that’s based around endurance is crucial to not getting overworked on these calls.

Breathing capacity is critical, not only to conduct technical rescues but to the job as a whole. How well you are able to breathe and not have to slow down or step out is paramount to the care that you give and the speed by which you can give it on these events. Being over the edge, in a confined space or in rough water already will raise stress level and increase heart rate. (Honestly, that’s part of the reason that we do the job, right?) We don’t not want to add to the stress by being in a deconditioned state or being physically unable.

A sample endurance plan for a moderate to advanced tactical athlete could look like this:

Interval cardio (repeat 15–30 times, depending on ability level; do more the better that your conditioning gets)

Overall, the core conditioning and overall strength of the tactical athlete really comes into play in these sometimes-complex runs that are technical rescues. Fitness training programs that consider the demands of technical rescues ensure that we are able and that we perform at a high level when we are needed.

“You may not be able to control the sympathetic part of your nervous system, but you can train physically and mentally to guide that energy into efficient and safe rescues,” Willer concludes.

Reducing the risk of injury by dramatic proportions definitely supports the goals of doing your job the best that you can and of keeping you on the job that you love longer, with a better life when it’s time for you to move on.

Lifestyle check on DOF execs on