Vikings offseason workouts to start with rookie camp May 14-16 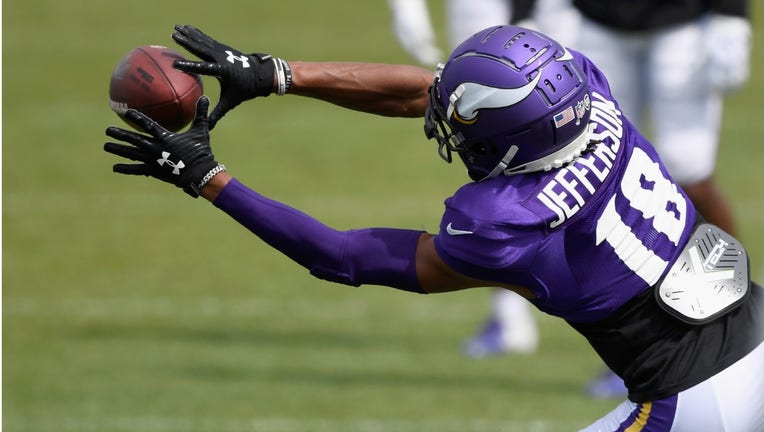 Justin Jefferson #18 of the Minnesota Vikings makes a catch during training camp on August 19, 2020 at TCO Performance Center in Eagan, Minnesota.  ((Photo by Hannah Foslien/Getty Images))

MINNEAPOLIS – The NFL Draft is over, and now the Minnesota Vikings and other teams in the National Football League move into offseason workout mode.

The hope across the league is there’s some sense of normalcy and consistency across the league, after there was no offseason work last year due to the COVID-19 pandemic. No rookie minicamp, no mandatory minicamp, no organized team activities and a modified training camp right before the regular season, with no preseason games.

The Vikings were originally slated to start their offseason workout plan last week, but some players opted not to attend as the league owners and players’ association hadn’t reached an agreement on COVID-19 protocols. Some players still showed up to TCO Performance Center to work out on their own and receive medical treatment, as their contracts are tied to workout bonuses.

Now, there at least appears to be a plan going forward for the offseason as the NFL announced dates for various teams to get started.

The Vikings will have rookie minicamp May 14-16, where the team’s 11 2021 draft picks and 11 undrafted college free agents will hold workouts. That’s where they’ll get their first look at No. 23 overall choice Christian Darrisaw, quarterback Kellen Mond and Ohio State offensive lineman Wyatt Davis among others.

They’ll have three sessions of organized team activities, May 24-26, June 1-3 and June 8-11. The Vikings can hold in-person team meetings as long as they stay in accordance with COVID-19 protocols. They’ll have up to 10 days of workouts, with no live contact. They will have 7-on-7, 9-on-9 and 11-on-11 drills.

The Vikings will also hold one session of mandatory minicamp, which will be June 15-17. The team hasn’t announced any information on training camp, but before the COVID-19 pandemic, it started in late July and spilled into August, before the preseason. Last year, the Vikings held camp at TCO Performance Center without spectators due to COVID-19 concerns, and without a preseason, it served as the ramp up to Week 1.

The Vikings will also have a better grasp of their 2021 schedule next week. They already know who their opponents are, but the NFL will hold its annual schedule release on May 12.

Oli reiterates Nepal will get back territories of Kalapani, Limpiyadhura and Lipulekh from India

Oli reiterates Nepal will get back territories of Kalapani, Limpiyadhura and Lipulekh from India